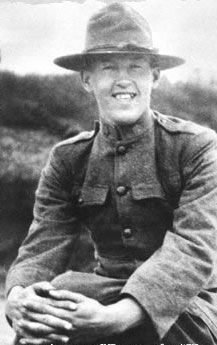 This August there will be a ‘Celebration of Recovery’ in the Cathedral Close attended by many local organisations concerned with various aspects of recovery.   Throughout August there will be a display in the Winchester Discovery Centre illustrating the world of AA – with thousands of meetings held internationally every day, and over 200 self- help groups using the 12 Step Programme developed by Bill Wilson and his friends.

A play about Bill’s visit is currently being written.

For further information please contact Chrissie B, AA’s Public information Liaison Officer for the Winchester Area on 01794324461 or email pi.northdown@aamail.org

During the final months of World War One a young American soldier named Bill Wilson visited the cathedral at Winchester.  He was in England with a US army unit en route for France and was temporarily quartered in an enormous army camp at Morn Hill just outside the city.  Perhaps his visit was in part prompted by understandable apprehension as to what would happen to him once he reached the front.

Strolling through the churchyard afterwards his eye was caught by the wording on a gravestone.  It had been erected in 1764 in memory of a young grenadier of the Hampshire Militia.  He had died ‘of a violent fever contracted from drinking small beer when hot… in grateful remembrance of whose universal goodwill towards his Comrades, this stone is placed here at their expence’ explained the inscription.

Bill Wilson may have had a wry smile on his face as he perused it.  The soldier’s name, Thetcher, wasn’t too different from that of his great friend back home Ebby Thacher.  And Bill would have remembered that he and Ebby had certainly put away more than a few small beers in their time…

Bill’s unit went to France to join in the fighting, but a few months later the war was over.  Despite his fears Bill had survived, and he was anxious to take up life in America again – he’d married just before leaving for England.  Sadly his initially successful career as a businessman gradually began to disintegrate as a result of his heavy drinking, until he was told that he would either have to be permanently locked up or would die as a result of his alcoholism.  But unlikely as it might seem, Bill and a handful of fellow alcoholics finally found a way in which sobriety could be achieved and maintained.

Bill Wilson became one of the founding members of Alcoholics Anonymous and, writing of his many experiences in the hope of inspiring others, chose the story of his visit to the cathedral at Winchester as a young soldier in search of reassurance to begin what would become AA’s famous ‘Big Book’:

We landed in England.  I visited Winchester cathedral.  Much moved, I wandered outside.  My attention was caught by a doggerel on an old tombstone: ‘Here lies a Hampshire Grenadier / Who caught his death / Drinking cold small beer /  A good soldier is ne’er forgot / Whether he dieth by musket / Or by pot’.

Alcoholics Anonymous’ ‘Big Book’ became one of the all-time best-sellers. The 25 millionth copy rolled off the presses as far back as 2005.  And around a million are still sold each year, despite it being available free online in English, Spanish and French.  In 2011 Time Magazine placed it on its list of 100 best and most influential books written since 1923 (the start of the magazine).  And a year later the Library of Congress designated it as one of the 88 ‘Books That Shaped America’.

The ‘Big Book’ is still very much in active use.  It is read and discussed at most AA meetings, and is available in more than sixty languages since nowadays AA holds thousands of meetings all over the world.  There are probably very few members of the fellowship who don’t have their own much cherished copy. The story of Thomas Thetcher’s gravestone is still on the first page.

Thomas Thetcher’s gravestone still stands in the churchyard at Winchester cathedral, although it’s a careful copy of the one that Bill Wilson saw on that warm August day back in 1918.  That stone was becoming badly weathered, and in 1966 was taken to the Regimental Museum in Winchester for safe keeping.

AA’s and their families from across the world often make a point of visiting Winchester.  They search the graveyard for the stone, for they like to read the familiar inscription for themselves and perhaps take a photograph or two.  And many like to sit in the quiet of the churchyard and take a little time to reflect on the gift of sobriety, on universal goodwill towards comrades, and on the strange twist of fate which joined the stories of two young soldiers – Bill Wilson of Alcoholics Anonymous, and Thomas Thetcher, the Hampshire Grenadier.

During November AA​ ​meetings are​ ​welcoming​ ​non-alcoholics​ ​to​ ​attend (Family members, friends, members of the public and ALL professionals) to​ ​raise​ ​awareness​ ​of​ ​AA​ & the help it provides to people who have a problem with alcohol. If you are holding a special AA awareness meeting in November please let me know on eclo@aamidsurrey.org.uk so I can publish the details on this website and also add your meeting to the list of the upcoming AA Awareness flyer.

We have been informed of the following AA awareness meetings: